As the mission of Maison Defroidmont is to share the product of our region to all, we must purpose to our clients a sweet range of products, composed with North of France specialities.
Maison Defroidmont, as we are mastering dough processes, we have wanted to offer you a sweet range of pastries specialities from our regions.
Let you guide by your nose and explore our universe.

Christophe Dovergne, a top Chef in every way

Lessons at the Avesnes hotelschool, videos on the website 750g.com, books, collaborations to promotegastronomy abroad, a consulting company and a restaurant soon.

Do you know Mr Plus, the one from the commercial ? It’s him. Christophe Dovergne, (still) a teacher at the hotelschool of Avesnes has more than one string to his bow. The handsome man, a bit narcisstic, is a workaholic, an overactive of the cooking whisk. He is the one behind the 750g website, his professional videos and the ones of him friend Chef Damien have been hitting the Internet for 10 years. The Chef is also an author of books.

In 2015 he met the bellissima Monica Bellucci at a gala dinner at the french Ambassy in Rome, then this past January he came back from the Summit of the Franco-Chinese gastronomy in Chengdu, China. He cooked there via an invitation of So French Delice, an association which promote the french gastronomy abroad. In his friends circle only Michelin-starred Chefs, Best Workers of France and incidentally Guillaume Gomez, Head Chef at the Elysée.

We met him today in the laboratory of the Defroidmont company in Maroilles. He is managing with two associates a new consulting company, Cook Events which offers training and R&D. Christophe Dovergne just has brought his classical and gastronomic know-how of Chef to the company who aims to produce the Maroilles melting heart. “They found the idea of the product but they couldn’t reach their goal” he explains. The Chef works on the product development « just like in a restaurant kitchen ». He takes part in testings and then he makes patterns which will help replicating the new product in semi-industrial.  The bold Maroilles melt, produced with Chef Dovergne, should be sold by Defroidmont soon.

The consulting company offers training (approved by the Member State) for food companies « which want to go further, do better than what they are doing now ». Cook Events works alongside with restaurants to build a menu in accordance with their vision. Last customer : La Ferme de Charles in Paris whose vision relies on the countryside and childhood winks. We can find in the menu worked with Cook Events an inspiration on the famous US serie « Little House on the prairie ». « The perfect Egg of Mrs Ingalls » is a soup made of sweet potato, lemongrass and dried skipjack. Traditionalists and gourmets will appreciate.

A cheee bar, From’s, will open late january in Amiens, a new challenge for Christophe Dovergne. He doesn’t leave for this adventure alone but with two associates, Cyril Chambert, teacher in Amien and Laurent Trochain well known in the Avesnois region.

Former student at the Jessé-de-Forest school, he managed the « La Crémaillère » restaurant in the public square of Avesnes, then the “Numéro 3” restaurant in Tremblay in the Yveslines, a Michelin-starred…

The three friends worked on a balanced coooking « with a gastronomic process » based on cheeses and high-qiality end products. We can find for example the menu of the From’s, the Maroilles Flamiche or the famous Maroilles melt… Everything in accordance with a nice wine menu.

The three associates will entrust their baby to a Chef « to recruit ». It’s the first experience but if it works, the From’s concept should be duplicate elsewhere says Christophe Dovergne.

In december 2013, the culinary site 750g was bought « between 8 and 20 million euros » by Webedia (Allociné, jeuxvidéos.com), subsidiary of the french company Fimalac built and managed by the billionaire Marc Ladreit de Lacharrière. Christophe Dovergne is not a shareholder anymore but he still put his image and expertise to the benefit of the website. A nice step for this website created in 2004 by Jean-Baptiste Duquesne. In 2006, the website was joined by two Chefs and teachers: Damien Duquesne and Christophe Dovergne.

1) Warm the Defroidmont sugar tart in the oven during about 10 minutes at 180°C.

2) Cut the strawberries in thin slices and arrange them according to your inspiration to cover the sugar tart.

– Sprinkle the whole of chopped roasted pistachios for even more gluttony.

– Realise a topping (water, gelatin, sugar) for an even brighter visual 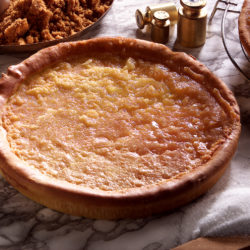 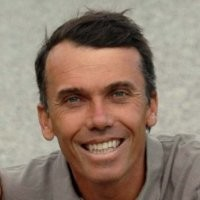 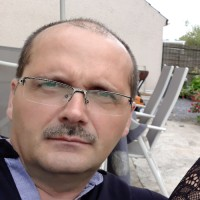